I doubt anyone is even reading this blog any more. I was hoping to start a new blog, attached to a new website, but I was waiting for pix from Nationals photoshoots for the overhaul of the site. Haven't received the goods from two of the photographers, and it's been almost 8 months!!! WPW has been the only one who delivered thus far. So, I procrastinate further on the new website...maybe someday....
In other news , I've been nursing a rotator cuff injury and haven't any big training to expound on. I was training on the bench one night when I felt a tweak with 300 lbs on the bar. I stopped my workout, but I didn't know it was as bad as it was until a couple of weeks later. I have been frequenting the chiropractor thrice weekly for cold laser therapy treatments and adjustments, in addition to slowly making progress with weights in the gym - very slooooowly. However, the alternative is surgery, and I do not wish to entertain that thought. I have gone from little range of motionto no weight to small dumbells on up to working the 30lb dumbells, and tonight I am on schedule to hoist the 35's....crossing my fingers that all goes well. It sucks, but am told I will be good as new as long as I don't try to rush the healing process. It's been a long time coming, but I am finally learning what patience is! 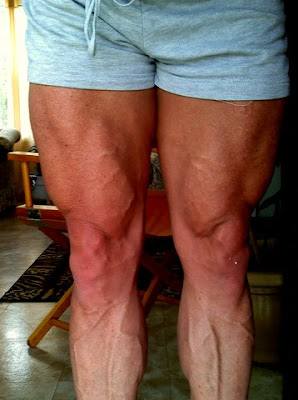 I have been able to squat because I made the decision to purchase a safety squat bar - best investment I have made in years!!! This thing totally trashes you in a new but won 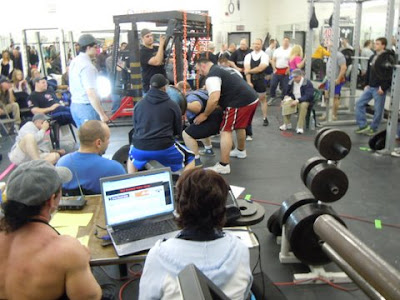 derful way. I am told that the crossover from training
with the SSB back to a straight bar is usually a good amount of increased poundage. I am anxious to find out, but it is going to be a while before I trust my shoulder enought to be able to support a straight bar 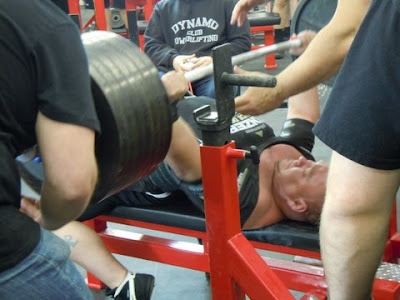 across my shoulders again. Those are my legs recently -as you can see, using the bar is really making that vastus medialis pop on my legs! 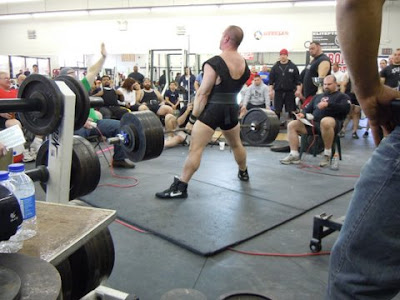 The first annual IronSport Power Classic was a total success. It was held on April 09 at (where else) IronSport Gym in Glenolden PA. It was the largest meet I have produced thus far. I had to turn several want-to-be competitors away. It was a long day, but one of the best meets I have ever had.I cannot wait for the Power Frenzy in November 05!!
Left - Tim Gale benched 780
Below - Jon Rock deadlifted 640
I had an INCREDIBLE support crew at this meet. Moving the meets up to IronSport has been a very, very good thing for the meets.
OK - I've partially caught up, not much, but better than nothing.
Posted by Kate Baird at 12:14 PM 64 comments: