I know - MIA again, I have been. It gets difficult for me to get excited about posting and elaborating on my training when my training isn't exciting me. I have been so slow to recover from the Masters prep - I sure did throw myself through the wringer for that. I have felt my strength brewing and twitching within - but I just haven't been able to get to it! Usually I go in , do one set, and I am tuckered out...
I deadlifted 320 x 10 the other night. I felt more reps in me, but it was just like, man, I'm done, and that was that.
Stupidly I squatted again on Sunday. I know better than to squat so soon after deadlifting, but I am just so darned excited to be able to do it again! I put 320 on my back and I could feel my hips scream NO!!! at me. But I sucked it up and did 8, then 370 for 3, which is no better than last week, but I will consider the overhelming soreness in my hips. That was all I could do.
Switch gears to tonight! Oh, I feel regenerated all of a sudden. I give credit mostly to my mp3 player, and the loud metal playing in my ear helping me to amp up. Our gym plays this awful not even disco music, and you cant gear yourself up to lift big iron with that playing. Soomeone said tomight that it makes him want to go home and lay his clothes out on the bed...lol
Anyhoo, the loud head banging music gave me the groove, and I used it. Benches- 260 x 7, and then an EASY 300 x 1, though I wanted to do another but GW didnt know so he pulled the bar back to help me rack it. Yes indeed, I am almost back!
I found my strength again!!! I need to be careful to keep it.
Posted by Kate Baird at 7:31 PM No comments:

OK - been awhile, so let me try to catch younz up in a nutshell.

Training has been good for the most part. The Masters prep really took its toll on my strength this time, and I am still easing back into it, but I am getting there - ALMOST back to where I was. I am still only 160 lbs, abs still in, still have striations in some places, but smoothing out and I need to to perform well.

I haven't deadlifted but very lightly one week since the show. My bench was up to 230 for 7 or 8 the other night - ok, we'll take that. Going to go a bit harder this week on the bench :).

I AM SQUATTING AGAIN!!! I started with the bar on week #1, graduated to 135 the next week, then 225, then 275, and have been at 315 for the past 3 weeks. Each week I add a rep. Today I did 320 for 5(no wraps)...it was so fucking hot in the gym this morning- don't think that the air conditioning was on in the back room at all. Everyone was melting, it was horrible. I even got dizzy on my last set because I could not breathe. I did one rep at 370, would have attempted another, but just couldn't muster the air. That's ok, next time... then we did some speed trainng with the blue bands...lol...need some help with this stuff.
My IT band has been so quiet and so good. My right knee, however is off and on problematic, but I amazed how well it holds out for the squatting. I do go to the chiropractor for knee adjustments every other week now. It is getting better.

Tank and I went to Miami a couple of weeks ago for Lisa Gaylord's Fitness Blitz weekend. What a whirlwind trip! Thanks and many hugs to Lisa and Erin Milc

hman for allowing us to be part of this event, and allowing us to meet so many wonderful and special people whilst we were there.
Both Lisa and Erin are like Energizer Bunnies and they kept us busy but we had so much fun!

I then spent another week in Connecticut with Tank :) I don't think we stopped moving the entire week. I'm still exhausted. We went to a taping of Deal or No Deal while I was there. Thank God I have callouses on my hands already. My hands hurt from clapping so much through 3 tapings of the show.

Tank took me to the Breakfast Club in New London again last week when I was in CT. Those guys are great! They gave me nail bending lessons, and I bent both of my first attempts, probably much to thier surprise! Nail bending is my new hobby :)

I miss you Tank when we aren't together! xoxox
Posted by Kate Baird at 10:09 AM No comments: 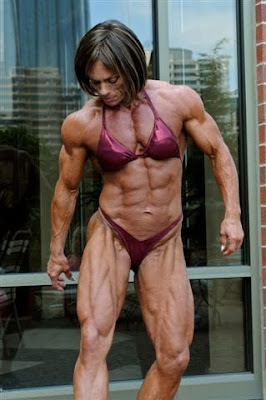 I'm alive - really I am. So much going on, lots to elaborate on. Usually when so much happens I get overwhelmed and keep putting things off, such as I am doing now...
and I am putting off this post until tomorrow - HAH!!! Just checking in to say I have not evaporated.
Stay tuned -
photo by Women's Physique World
Masters Nationals 2009
Posted by Kate Baird at 8:12 PM No comments: