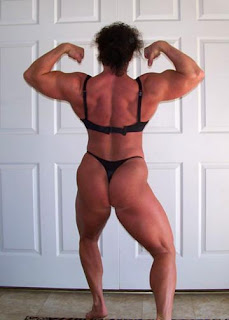 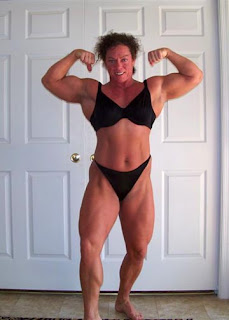 This blog is getting boring - same old thing, pictures of Kate in her black skivvies.
And speaking of those pictures of me in my skivvies, here they are!
Progress is noticeable, but as we are coming in on the 11 week mark, we are going to be making some changes so things will be happening quicker and details will start popping. It feels so good to have a waistline again. Monday when these photos were taken I was still hanging around 172 ish - but this morning, Wednesday, I'm at 170 ish... Ish!!!
My left arm is a bit strained, so the left bicep isnt flexing as well as it usually is. I wish people would stop asking me how big my arms are...does it friggin' MATTER what they measure? Fat people have large measurements too...
I am soooTIRED!!!! I keep saying that, but it is so true. I really, really don't think I ever physically recovered from that bus trip from Hell. Can't stop to recover now, though I am taking a rest week this week. I usually do take a rest week, or at least a few days off every 8 weeks or so. If I didn't, I would be dead.... I have to start training lighter and less intensely for the rest of these 11 weeks or I will surely die....I just can't seem to get HEAVY off of my mind.

Posted by Kate Baird at 5:29 AM No comments: 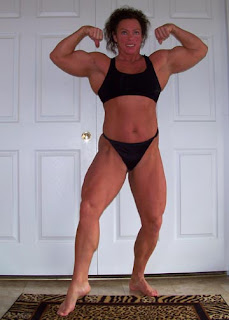 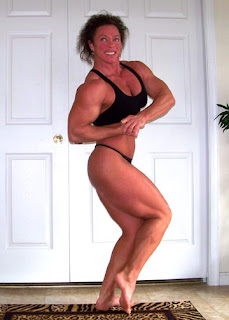 172 in these pictures - same weight as last week, yet a tad leaner.
By the way, I am only 5'4. I am always told I look taller in photos, but really, I'm not a tall gal.
I was going to go into this show, the Masters, on a somewhat quiet note, but seems as if the world is watching me (Hi SiouxCountry! - lol )
Oh, that's right - we are talking about me....quiet, yeah, right...actually I don't have a whole lot to say tonight, so I'll leave off with the pictures and post later this week. I promise I will find something to rant or whine about!
Posted by Kate Baird at 7:49 PM No comments: 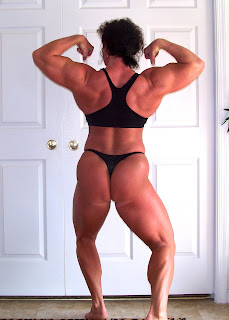 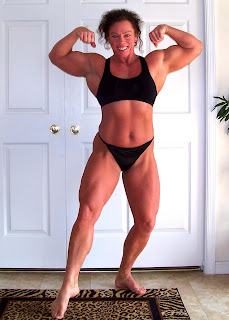 13 and a half weeks to go. Time to start posting progress pictures. Here I am in my skivvies. I weighed in at 172 even yesterday morning. And yes, I know that my gluteus
are, well, quite large. Or is that gluteuses???
I have really been concentrating on NOT bringing my gluteus medius into leg movements, but it is still growing...that is for sure.

My knee is holding up well! My IT band has not been noticeable all week!! What do I complain about today???? lol - NOTHING!!!! Well, I can whine about how my strength is plummeting, because of the diet, but the diet is actually going quite well. I am not hungry at any given time of the day. In fact, I still have trouble eating all that I am required to eat. Lord knows how I was able to compete in a full power meet 6 weeks out from the 2006 Nationals. That was nuts. How did I do that, I wonder... how did my strength hold up? What was I running on back then - I want some of that back - lol....
It had been a few weeks since I had a really good leg session, but Saturday left my legs screaming and very sore for several days. Aaaaahhhh... I am so tempted to run under the freaking squat bar because my legs feel so good, but I must hold back, I must resist temptation.
I have alot going on in my life right now - good things. I am happy.

The training is bodybuilding - reps and sets.... kind of bores me not hoisting BIG iron and reaching for those maxes...but I do what I have to do. There are no great poundages, no great pumps. I'm not sure what to write about...

FANTASTIC news - I left on the last posting on a low note about the knee. I had a feeling it wasn't tendons or such, and I had a feeling what I needed was chiropractic services - I was correct. Seems my knee was "off track". I have been going to a new chiropractor for the past two weeks, and my knee feels just fine now. This coming leg day will tell me how much progress we have made. The other really fantastic thing of note is that for the first time in a year and a half I sit here with a left IT band that is giving me no indications of being problematic. Our bodies act holistically and respond as such too. Chiro said he wasn't surprised that the IT problem is less pronounced . I'm not going to run into the gym and squat this weekend, by any means, but I am now definitely, positively sure that I will be under that squat bar again! 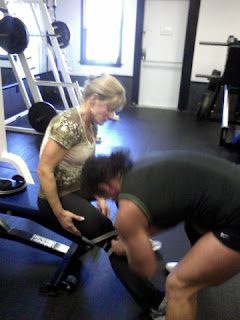 Speaking of squatting - My friend Beth Beitzel was squatting the other day "just for fun" she said, as squatting isn't usually on her training agenda. 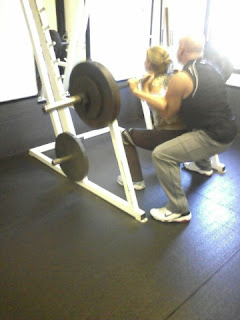 She's one of those naturally "mesomorphic" and strong types, though she is always trying to be skinnier and won't admit her strength. She looks great, always does, and is strong! Go Beth!
Posted by Kate Baird at 10:51 AM No comments:

- to go.
I started my Masters Nationals preparation "food manipulation" on Monday. Most people would call if a diet. Typically for me 16 weeks is a bit on the lengthy side to be on a contest diet, but as my knee is having troubles at the moment, and going for my walks is out of the question (psuedo-cardio), I am "fine" with having a lengthier diet.
I started right on 180 this weekend - I think it was 176.8 this morning. Of course, I was up to 187 at one point in February, and got down to 179 for the powerlifting meet. I dieted to about 182, but my nerves ate up about 3 pounds. In fact, I would go so far as to wager that I weighed about 177 on meet day. I went to my parents house after weigh-ins Friday night. I was ready to raid thier refrigerator and food cabinets. But, Alas! The cupboards were bare. So lack of proper fueling and nervousness certainly ate up a couple of additional useful pounds. Then I stabilized through last week, but I do admit - I should have eaten it up a bit more for recovery purposes. For now, it is too late.


Let's not focus on the knee yet, please. Keep me on the up and lighter side here :) . I'll expound on that later. It is ALWAYS something with me. Yes, it sure is....My IT band is still problematic, but so much better than 5 or 6 months ago. Hooray !

By the way, even though I tremendously sucked, the two lifts I did two weekends ago are currently IPA Womens 181 Raw World Records :) .... I really don't think it is compensation for having personally sucked, but, hey, yeah, I'll take them, be happy, and move on.
Posted by Kate Baird at 3:24 PM No comments: