On a high note, congratulations to Tony Paradiso who won the Montreal CFBB Heavyweight division on Saturday. Tony's got the body of an Italian god, with lines and symmetry and legs (and arms and everything else) to die for. Well earned and well deserved Tony!!!

On a low note... I competed in the IPA DE State Championships on Saturday. That 300 is still eluding me. What the F*** is my problem? I can do it, and do it well, at the gym, for reps, and then I get to the platform and I fall apart. I got my opener of 270, easy as anything I have ever done, felt like a feather (see video attached). It isnt even so much the number anymore that bothers me - it is the performance under pressure, or I should say the non-performance under pressure. My plan was to do a 270 - 300 - 315.

My friend Scott Kuzma, who is a tremendous raw bencher, says there is no need to worry and over analyze - it is all predetermined in some way or another. So why aren't the benching gods allowing me my due?

So in light of the poor benching, and I was exremely tired (one of those toss and turn before the meets sleepless nights ) I brought my deadlift numbers down. I actually had GW pick my numbers and I held my ears when they announced the lift, so I didnt know what they were. I had pre -planned a 410 - 450 - 470. After bringing them down I did a 375, 400, 430 and a 440 on the fourth. I should have left the numbers higher - I definitely could have pulled the 450, and I am pretty certain I could have yanked a 470 all the way through too (see video of 440 attached).

So I sucked, as I usually do when I compete in powerlifting, but the meet was good. It was held at the Training Center, same place as the (notorious) Delaware Power Classic :). I finally met Gene Rychlak and his wife Ame. Super people. it was a pleasure to help them out a little with the meet. Regardless of federations, raw or geared, drug free or not, all lifters should remember the goal - successful lifting!!! Let's all lift together, not apart!!!

And congratulations to Phil 5150 who pulled a whopping 500 raw at his first meet !!! 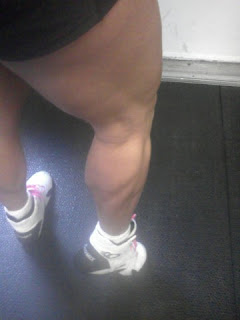 I am the busiest person I know who doesnt make any money....how anyone can work a standard 40 hour work week and get anything else done is beyond me...
Could be why I am a poor beggar girl these days.
I am about to embark on yet another career soon. Stay tuned on that. Time to prove how good I am as a sales pro.
Yes, yes, I said sales. Stay tuned for details.

So lessseeee... my leggies are coming along shape as well as size wise these days. However, they are what they are...They were built for power and strength, not beauty. Though some might see them as beautiful... As long as I stay on top of my therapy they feel good. If I slack off for even a couple of days the pain comes back to haunt me. So its the ballin' o' the periformis for me.

Was oh so tired every training day last week - still beat up from that danged traveling, I was. Incredible how much SITTING can tear me apart!!!! But holy hell, I was torn apart for a long period of time.

Wednesday benching was ok, not great, but ok - did two sets of 280 for 4, and a nice static with 410 for 20 seconds, but I was certain I could have done better had I not felt like I had been mistaken for a wet dish rag and and used to mop up the dirty floor. Love those statics. They really make your triceps feel like hamhocks.

My energy reserves were finally coming around Sunday, for legs. We had a killer workout. I do believe there was never a better leg apparatus created than a Nautilus Duo-Squat machine. Pair those with the gool old fashioned sissy squat, and you have some mighty big thighs about to burst into life.

Happy Birthday Jody - wherever you are!!!!

Posted by Kate Baird at 8:33 PM No comments:

Have you ever seen the movie Trains Planes and Automobiles? I lived a mini version of that last past weekend...


It was finally time for me to meet with my new contest prepper. I had to take a long journey out of town. It was bad enought that I was going to have to travel almost 10 hours one way to begin with on Friday, then turn around and come back on Sunday... I took a bus, having little funds these days to spare on extras. Bus travel is really not so bad, really much more comfortable than a plane if you ask me. I drove an hour and a half to the bus station in Wilmington, then took a 2 hour ride to NY. The bus made it fine to NY, then I had an hour layover before I caught my next bus to my destination. It was to be a little over four hour journey from NY, had the bus been on time....


Traveling about 2 hours from NY, a large truck clipped the right hand mirror on the front of the bus. The bus driver immediately pulled over to the shoulder of the road. She called in for a mechanic, then pulled the bus off the highway to a desolate parking lot in front of an old warehouse in a dark and lonely part of some town. The mechanic couldnt fix it on the spot. We sat in this bus for over 5 and a half hours before a relief bus came!!! Want to talk about a group of antsy people! Rolled in to destination at 10:40 instead of 5:20.... omg


So, on the return trip - no problem traveling by bus. I got into my car figured I'd be home after an hour and a half more of traveling by car. Ten minutes after I started driving, it started snowing. The more I drove, the more it snowed. Blinding conditions, and simply petrifying at points. It took me an extra hour and a half to get home.

All in all, I believe that the trip will have been worth it in the long run - come July I will be all that and then some. La De Da...

Needless to say, all last week I was physically beat up from that ungawdly trip. Sore and tight, it will take me some time to loosen myself back up again, even after a week and a half I am still feeling the wrath of Greyhound.
Posted by Kate Baird at 6:56 PM No comments: