No Snow is Good Snow

I'm not sure it really has anything to do with the mandatory "rest" I have been subjected to, but whatever - last night was a really good bench night. I popped 4 really good 280's up. I've done 4 before, but they weren't nearly as nice as these. I actually surprised myself. The snowy cold and dampness was definitely making me feel like I was never going to warm up. My first working set,250, felt heavy and I felt sluggish. For some unrational reason I decided to go with 280 even though I thought that one was going to be a struggle and voila - I guess I did warm up enough. 4 easy breezy beautiful reps. Then 230 for 11. My weight - 170 lbs. I've been doing less volume with the focus being on strength now instead of aesthetically building. Our second movement was flyes - 3 sets.

We have been doing this exercise for our shoulders that I like/hate. I don't know if it has a name, and I haven't yet figgered what to call it. You stick the end of the barbell in the corner, and the plates on the other end. You push up against the wall using delt "hoist".... holy moley - they work my shoulders like nothing else ever has. It is like doing real work, as opposed to a machine that fabricates motion, if that makes sense. Just one deltoid exercise, but this one was more than sufficient for trashing our shoulders.

My back is not sore from shoveling, but only because I don't own a snow shovel - HAH!!! I went out Monday searching for one at various stores, but the lesson here is Supply and Demand - don't go looking for something when everybody else needs it too. I could not find one anywhere. So I let a couple of strapping young fellows that knocked on my door shovel part of my driveway, yet I still have to wade through the snow to get to my car from my door. High steppin' cardio ?
Posted by Kate Baird at 11:45 AM 5 comments: 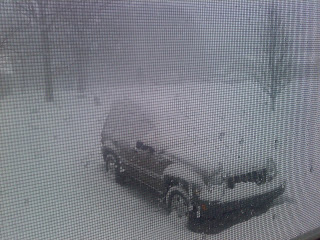 Here I sit during the second blizzard this week! Third snow storm in 2 and a half weeks.
Ok, you mid-westernerers and northerners tell us we Mid-Atlantic babies are whining, but it isnt just snow. These are actually full fledged "Nor'easters" coupled with snow. 60 mph gusts of wind - you'd be whining too. We aren't used to t here on the lovely Delmarva Peninsula. I think I got off with a mere 20" or so total. It's hard to tell I can't see out the window right now!!
Training - besides the gym being closed alot because of the weather, I had some personal issues keep me out of the gym for a week or so... however, typically I don't rest much from the gym unless it is forced rest, and by cracky this forced rest has done me good! My muscles look really big and full right now.
I still have abs at 171 - 172 !!! And veins in my arms and shoulder striations...My
strength has been up and down because of the time off and the drain of the personal issues, but I foresee it going in the right direction once again rapidly - UP!!!
We did dealdift the other night, that of which I really have done very little of lately. I did them off a 3" block, 370 for 5 - all resets. I have no clue what that would translate into off the floor. I really like pulling out of a deficit position. It feels good in the hamstrings and glutes. Today WOULD HAVE been chest day....grooooan. It's just turned into nap day. ZZZZZZZZ
Posted by Kate Baird at 1:54 PM 1 comment: