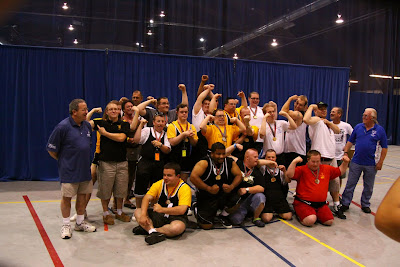 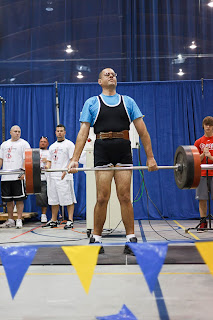 I was honored once again to partake in the Special Olympics this year, acting as judge for the powerlifting as I have done for the past 3 years. This year was extra special as I took on the task of coaching one of the athletes. Robert Smith is his name, he is from Oceanview, Delaware, and he had a great day on the platform. Robert hit PR's in both the bench, by 15 lbs. and the deadlift, by 5 lbs. He benched 115 and deadlifted 205! Congratulations Robert - you worked hard and your medals were well earned. 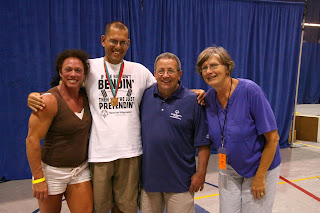 Me, Robert with his 2 bronze medals, Mike - director of the SODE Powerlifting, and Ann Smith (Robert's mom). 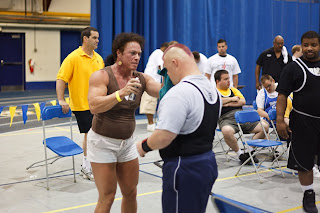 Here I am spraying my friend Jon Stoklosa's mohawk purple for him! He sprays it a different color each time he competes. 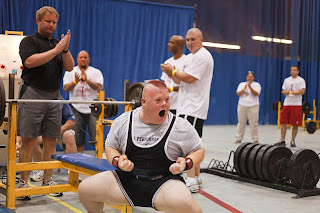 Jon after completeing a big 370 bench. Jon is going to the National Special Olympics next month, as well as my friend David Hill, also a powerlifter, and Forrie Brown - basketball.
Bring home the medals fellas!!!


I weighed in at 164.6 the other day. I'm told I look bigger than that, but no, that's all. I attribute it to all the different techniques I've used over the past year, both in training and diet. I imagine my diet, should I continue on to the Nationals (remember, for the record - I have NOT commited yet) would begin sometime next month - YIKES!!! Though with about 25 lbs to lose I am wayyyyyyyyyy ahead of where I was last year, when I lost a total of 41.
My arm is doing quite well after training last week. I will add a little bit more weight each workout, but no huge weights for me for a while to come. :( I was doing some cardio over the weeks that I could not train, but now that I am training again with weights, I must stop the cardio, as it is causing me to become terribly overtrained. My legs hurt so much I couldn't squat the other night and had to train them extremely light. Hah! Most people pick up thier cardio on contest prep - I have to curtail it...lol...whatever!!!
Posted by Kate Baird at 9:06 AM

For even more on air conditioning units as well as quiet dehumidifiers go to www.buyingairconditions.com. This process includes combining, and possibly compression, two different pieces of information. Always mount the recycler for easy access by all family members. The microwave radiation raises the temperature inside the breast tumor from 37 to 49 Celsiusin compressed breast tissue followed by a cool-down period.