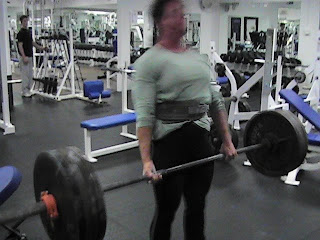 (nice face). By the way, in case any one wonders, I deadlift conventional style. Again, who cares what else we did - the deadlifting was all that mattered!
I am quite positive that all of the therapy I have been doing for my legs and hips and the magnetic therapy is what is bringing Power Goddess back around. Everything feels loose and RECOVERED.
I was down to 182 lbs. today,but that gives me good feeling about being able to compete in the 181 class without much effort to make weight!...
Hmmmm...does that statement mean what you think it does??? Stay tuned!
Posted by Kate Baird at 5:53 PM