After the Show Crash and Burn

I knew as soon as I stopped moving I would be hurting, and I am. I'm still in the "running on empty" stage. I'd kill myself doing back to back shows as some of the women are going straight into the USA. I am physically fried...of course, I was moving into that state for quite awhile before the show. I am now feeling the physical wrath of moving so fast for so long.
OK, the show....it was a well run event, and it is a great venue to have an event such as that.
My opinion on the placings....hmmm...yes, there were a few "WTF" placings in the show, and obviously in my division. I just simply can't elaborate because I don't feel it is right for me to say what might be construed as mean or humiliating things about people in a public forum such as this. Pictures can be found on http://www.musculardevelopment.com/ and http://www.genexmagazine.com/ . If you go to GeneX Magazine, you can read that I actually did receive an unofficial award, presened to me by some of the photographers - The first "Tom Nine Screwed Award". Most of us will always think that we should have placed higher in a competition (unless, of course, we win). I went in with the attitude knowing that the judges would probably ignore me like they usually do, so I was able to focus on other things, such as having a good time. However, it feels really good to know that I was appreciated by the photographers, the fans, other competitors. I have been told by many that 3-5 was realistic, and even a few 2nds, but I won't try to give myself too much in the way of undeserved glory. I regard the photographers' opinions pretty highly, as they go to all of the big shows and work with most of the top women. To have the honor of the TNS award I accept with my head held up very high and proud. However, I will gladly pass it along to someone else next time!!!! 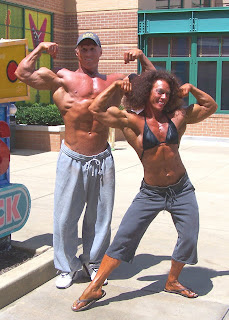 My dear friend Jack Osborne only made it to tenth in the Men's Over 40 Heavyweights. But it was great to see Jack set foot up onstage again! He had some health problems over the past couple of years (almost died twice!). It was even a very last minute decision for him to compete. I hope he focuses on training for the show again next year, because he can be a major force to contend with in the line up! It was great to spend a little time with he and his wife, Chrissy. They own the Training Center in New Castle, Delaware.
I've spoken to quite a few who thought Laurie Larson should have placed higher, too. 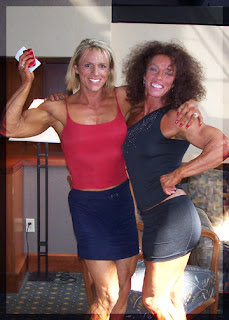 I really like her. On Sunday she had road atlas veins poking through all over her legs. If she can bring the Sunday look she had to the Saturday show next time,
YIKES!
You would think it would have been really easy to find a good steak around the Pittsburgh area, but it took three restaurant tries before I found one, and then it was just OK. But during the restaurant hopping we were able to bump into Marlene Churchill-Wolverton and her husband, Freddy. They sat down with B and I and we really enjoyed spending some time with them. I really like her look, and was happy to see her place in the top 5.
I enjoyed working with all of the photographers - Bill Jentz, John Napfliotis, James Cook, Gene X, Tom Nine, Annie Rivvieccio, and Dan Ray. I especially liked Dan Ray's creativity. They all bring something to the table, and they all added an element of enjoyment to my trip.
Of course, I wouldn't be doing any of this if it weren't for B - Broderick Chavez, the Evil Genius.
He has had me step onstage every show he has prepped me for in exactly the shape we predetermine. (too bad we can't predetermine the judges actions). He encourages me, helps me - he got his weekend workout following me around during all of the photoshoots with all of my bags and apparatus- has helped my confidence grow to where I actually believe in myself.
Thank you, Evil Genius -
Time to hang up the posing suit until next year. I will be in powerlifter mode again starting next week.
Posted by Kate Baird at 6:29 AM