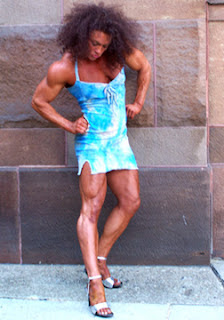 We figured out why I was having some problems drying out for the Masters - I was in the beginning stages of this horrible stomach flu that is now kicking my butt!!! Oh my God, do I feel retched. We were passing the tight fluttery stomach and constipation off to nerves and stress, but no, it was and is definitely the stomach flu. I guess if I'm going to get sick it's best to get it when I am on mandatory rest duty anyway. This will make sure that I do rest and stay out of the gym. Good thing I was able to stave off the major wrath of it until now, and good thing I didn't plan to go on to the USA, where I hear Michelle Neill is kicking butt - go girl!!!
Powerlifting USA- July edition. Thanks Scott Taylor, APA president, for saying such nice things about me. The picture on page 83 is me making a very sour face for having missed my benches - I only got my opening lifts that day. 'twas not a good day for me that day on the platform. I had big plans, but it wasnot to be that day. Plus, I would never wear a blue belt with a purple singlet!!!! The lever on my belt broke moments before the meet began, and I had to borrow my friends belt, who was lifting that day, but it was one hole size too large.
Also the write up on page 88 on the APF Delaware Power Classic (my meet) looks great! I am so proud of the evolution of that meet.
The 2006 Women's Top 20 lists are posted in the July issue, also. In the 165 class I made 13th highest squat, 15th highest Total, just missed making the bench and dead lists by 4 and 5 pounds respectively.
In the 148's I tied 11th in the squat, 9th in the bench, 14th in the dead and 9th Total.
But remember boys and girls, I'm on the lists mixed in with geared lifters, some wearing up to 5 layers of canvas, whilst I performed my lifts raw - I don't see where any raw lifters are placed ahead of any of my lifts, they are all geared lifts, except Julie Scanlon's 275 raw bench. To be fair, they did omit her raw NERB Total, probably just by mistake of 425 sq, 305 bench, and 420 dead. Julie Scanlon is awesome, and I'll give her credit anytime, after all she is one of the best, a very nice lady, and one of my favorite female powerlifters.
Posted by Kate Baird at 12:47 PM