Some thoughts on my physique... 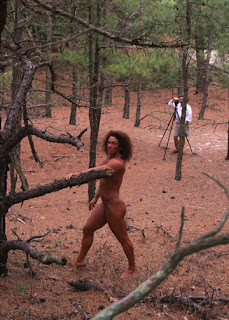 I had a good time running around stark naked in the woods with two men the other day!! Here is Kevin Fleming shooting me. It was on the verge of a downpour all afternoon, however we were able to escape the wrath of the storms, which were pretty wicked in surrounding areas. I had to spray a host of bug spray to keep the 'skeeters and horseflies off of me! The aroma of OFF mixed with ProTan is definitely not a sweet one.

The low diffuse lighting lent itself to the mood...we got alot of FANTASTIC images, and I can't wait to post some of them in my Members Section! Very artsy, and very naked! :)

We went into the studio the next morning, and shot some more. 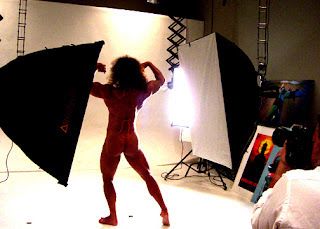 Here is my two cents worth about my physique - when I don't flex, yes, there is muscle, but I do not wear it in a "muscular" fashion...sometimes it is not until I flex where some people actually realize that I have as much muscel. My physique is structured so that I could probably weigh in at 200 pounds and still not look as "muscular" as some women at 150. It is a curvy, athletic, feminine physique. Probably one of the more "marketable" physiques. However, onstage, I think that the judges will once again "miss" me, because of that fact. I can flex and hold my own, but they do their very first initial assessments from the quarter turns, and I'm not sure I look muscular enough. My arms are smaller in proportion to my torso than most national level female bodybuilders, not that I think that is bad, I think it looks more proportionate and more "feminine", but it is not what the judges are used to seeing, or liking. Heck, all dieted down right now unpumped they measure 15 and a half! My abs are of a different breed than most - they aren't the big, overdeveloped turtle shell looking abs that the judges are used to seeing and rewarding. Of course, I like mine, and I'm not changing them. It makes my waist look smaller. Then they'll look at my back and probably say it is "overdeveloped"...HAH!!! My legs have size to them, but because of the "athletic" shape to them, they don't appear as big as some legs, but they are.
To sum this up - I doubt that the judges will ever place me high. So be it. If I could change it, and heck, we all know that I could change it if I really, really wanted to, but I won't. Because, after all, I am female, I am a woman, and I think I have a perfect blend of what I perceive women's bodybuilding to be. But my opinion doesn't count on stage.

you are the best.

Your blog keeps getting better and better! Your older articles are not as good as newer ones you have a lot more creativity and originality now keep it up!