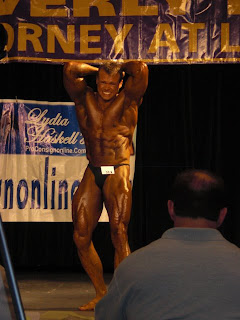 This week has been a good week - the best part about it was the 5 straight nights in a row of sleep! Unfortunately, my streak ended as last night I had to resort to "magical aid", but seriously - the last time I had that much sleep was probably back in April...that's a long miserable time!
Sleep is my FAVORITE DRUG! Without it, I fall apart.

CONGRATULATIONS to my friends Andy Sedar and Michelle Schanz. They both competed for the first time at the DE STATE Bodybuilding competition yesterday.
Andy placed first in the Men's Novice HWT and Overall
and 2nd in the Men's Open contest HWT and 1st in the Men's DE State HWT 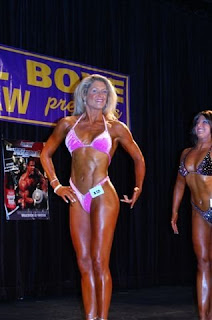 They both looked INCREDIBLE!!!
Hopefully we will be seeing both of them up on the posing dais again! I am soooo happy for both of them! Many of us have followed Andy's journey through his thread on the animalpak.com forum. (see "McFly's Journey") I have had the opportunity to train with Andy, and know how damned hard he trains, and how he puts EVERYTHING into each rep.
Michelle- it is hard to believe she has never competed before. She has the "X" factor to do very well in figure if she pursues it farther.

Power Goddess is starting to come back around to the gym - she showed up unexpectedly Wednesday on chest, delts, tris night. I almost didn't bench because of some aggravation up around my right clavicle area, but I did...I did 230 x 7 and thought that was good considering everything...
the next set I got into a groove and did 230 x 10. OK - well where did THAT come from??? Because I certainly didn't feel like gangbusters. Third set I did another 230 x 10!!! They were all certainly passable in any powerlifting meet.
Zach trained with GW and I again. He's fun to train with. He let us in on the fact that he is actually an Olympic caliber swimmer who almost made it to the Olympic trials this year, but he hurt his back several months ago and that put a damper on everything. Wow...poor guy. I know what it's like to pull my back out a week prior to a powerlifting meet, and not be able to compete, but then there is going to be many power meets to choose from over the course of several months, so you just suck it up and move on. The Olympics only come up once every four years. Well, Zach - keep up the weight training and it will only make you that much stronger,better, and faster for next time you have the opportunity to go for it!

Friday for some Godforsaken reason I decided that we should deadlift. I went for 320 x 12, and then 370 x 6...my form looks good to any trained eye, however, it's not my usual form - sluggish is the best way I can describe it. I am still trying to catch up to myself from sleep deprivation, but I do have hope now! I have to mention that the air in the gym is HEAVY - lead iron bags of rocks HEAVY. The air conditioning is on, but the humidity is still incredibly high. Breathing is difficult. I don't usually sweat very much, but these days in the gym I sweat rivers... it is hard.

I was up to 166.8 this morning. I've been eating alot, eating cleanly - but alot. My body is soaking up food like a sponge. I am laying it all out this time - BIG is the key word... watch Kate grow!

I didn't know you had a blog. Someone sent me the link....thanks for mentioning me....hope to see you soon!!!!