That's about how much of my normal self I feel today - about 87%. I was wavering back and forth today about hitting the gym for an abbreviated training session. I couldn't decide if going would be pushing it and be detrimental, or if going would actually help my system "jump start" for Monday- because no way in H-E- double hockey sticks am I missing training Monday, no matter what the story is. So I opened my front door. It was at least 60 degrees out, and sunny. That was enough to push me outside and down the road I went.
I still have these lovely swollen black eyes. It is kind of interesting how people either look at you, or try not to look at you without asking what in the world happened.
I did about half of the amount of work I would do on a back - bicep day. No really heavy movements...my lowest rep set was 8, most were in the 10-15 range. I set out to do one armed lat pull downs, but as soon as my arm reached up to and grabbed the handle, I knew I'd have to scratch that one off of my list of exercises. It felt like it was stretching my breast open.
All told, I did 15 sets, including 3 for shoulders (heck, can't let those wither). I weighed in at 162...my arms and shoulders and legs look a little leaner, even after laying around for two weeks. My abdomen is bloated, but that is probably due to all of the drugs, the laying around, and a bit of an off-kilter diet.(what, me eat Pringles???) I had to take some super duper anti- biotics, because the doctor wanted to be cautious and to make sure my fever wasn't an infection. I knew it wasn't, but better not to risk it - I took the last one yesterday but they really made me funky. Glad they are over with. 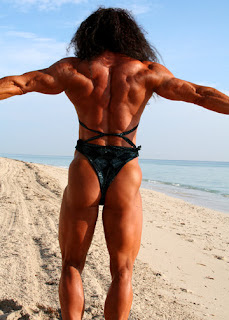 So I came home, ate, took a hot bath, and actually fell asleep!!!!
Anyhooo - here's a "16th" place back for you....yeah, that's right...yes, I'm griping, and after looking at pictures I just received from Eric Lemke taken the morning after the Nationals...well, Hell, I have to.
Granted, I looked a bit fuller the morning after the contest, as many people do, but 16th place was highway robbery... there, I finally said it out loud, but that's all I'm saying. A few new pics were posted on my free site, on the Nationals page....Eric Lemke is a pure joy to work with, can't wait to work with him again. And someday, when my webmaster REMEMBERS...there will be a new video posted on my free video gallery page (he'll read that, but will he post it???)
Posted by Kate Baird at 3:48 PM