My legs have been feeling less pain from my problems as of the late, so I decided to test the waters and leg press Monday evening. I thought about trying to squat, but it was a better idea to me that I was not in jeopardy of falling over or being crushed on my feet if things did not go well. I first pre-exhausted with 3 sets of leg extensions, so I did not have to use such big poundage. I did my first set with 500 something, for 20 reps...ok, moved up to 600 something for 15...again, fine. I went up to 750 for 10, no wraps or anything, nice knees in my face deep...granted, Monday night I had to take a handful of Ibuprofen at bedtime because my problem areas were throbbing like the dickens ( what is "the dickens" ? ), but I am pleased to report that I indeed have made some improvement. It was "uncomfortable", but leg presses are uncomfortable anyway, are they not? I'm not expecting miracles, because I am going to moving up to 180. The fascia is sure to give me more problems as I grow again, but I was happy to be able do some good old fashioned big work for my legs again. B tried to tell me that the world doesn't exactly revolve around big weights, but hey, he's wrong - HAH!!!

Last night I was feeling worn out tired. I'm still running around trying to clean the old condo (hopefully it is done TODAY), not finished unpacking here and it is getting gritty dirty from lack of cleaning and heck, the yard is carpeted with leaves I haven't had time to rake, my computer work is wayyyy backlogged.... Oh, back on track - anyhooo, I've been running ragged lately and tossing and turning alot instead of sleeping well, from all of this overwhelming stress, so I am dog-tired (are dogs really that tired?). However, when I get on a certan level of 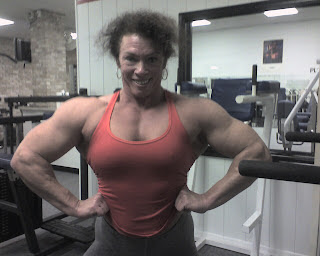 tiredness, not overwhelmingly exhausted, but tired, I don't have the enrgy to pay attention to things that are happening around me, or anything else but what I am doing at that moment - which is lift that weight and do it well. Last night was one of those tired but focused and zoned in nights. It had been a long time since I benched over 275. I did 295 for two GOOD paused reps. And that was after two good work sets beforehand. Everything else went well. I obtained a big round hard pump, and I am not sore this morning. I weighed in at 174 yesterday. The pictures I have been posting as of the late are camera phone pics, so they don't show the good detail like the veins sticking out on my deltoids (but why do they show the dark tired circles under my eyes?).
Posted by Kate Baird at 5:25 AM