My favorite night of the week - bench night! Looks like George Wilson will be joining us every Wednesday night for bench night. A great addition to our weekly circus!!! George is awesome - and I'm the lucky girl who gets 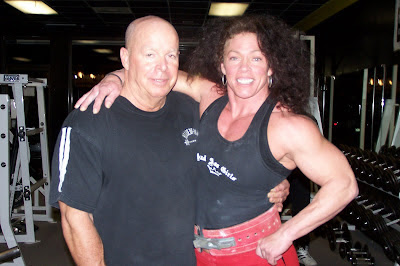 to train with two terrific guys, B and G. I found out last night that G is 59, but I swear he looks 10 years younger. And strong he is! We just need to keep his butt anchored to the bench, 'but by cracky' I think he's on the right track. (get the pun?....sorry) 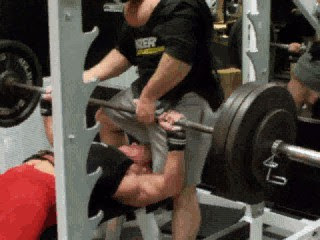 d prep my nervous system, B had me get under 365! (See picture as proof). I was expecting to do just one negative, but....B had different plans. After unracking, I didn't really have the feel of it, then B kind of pushed it into the groove, and it went WUMP!!! down into my chest, he pulled up on it some, of course, while I pressed. Then immediately again. It went up a little too high on my pecs this time, actually I feared that it was going to crush my throat, but I stuck with it, and B. By the time the third rep rolled around, I finally got the groove of it, and accepted the feeling of 365 (F'ing heavy!!!). I actually gave it a really good go on the way up! I did not realize it until after reviewing the video clip but these were all paused! Sometimes after doing a set or more of pause reps, it is hard to unlock the mode from your brain. That is exactly what happened to me. I WILL have that 365 sooner than most of you think. I may have to go up a weight class, but it's in me - just give me some time.
Posted by Kate Baird at 3:07 PM