In my Power Goddess photo gallery, there is a photo of a man named Paul Timmons. The caption reads something to the effect that he was the first man to swim across the Delaware Bay from Cape May NJ to Lewes DE, which he did in 7 hours and 15 minutes. (Just imagine yourself swimming for 7 hours and 15 minutes nonstop!) Paul has been in the IronMan Triathlon several times, he has swam around Alcatraz Island, he has done so many athletic feats, and just keeps on doing them. He loves to challenge himself.

Recently he became fascinated with the 300 Challenge, and the philosophies and training methods that are associated with www.gymjones.com. Paul read about one of their challenges - how many double bodyweight deadlifts can one do in 20 minutes. The record Paul set out to beat was 36. He asked me to come in and video his feat, and to stanby with moral support.

Paul crushed that number with a total of 55 reps at 325 lbs (his bodyweight just moments before the attempt stood at 161). 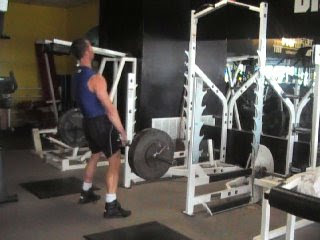 I believe he went 18, 10, 8,7,7,4,and 1. He didn't go for the calculated method, rather the all out balls to the wall method. He's so superiorly conditioned, I am still in awe after watching that. Needless to say, yesterday, the day after, it was rather hard for him to stand! I can't wait to see what his next personal challenge is -

GW and I trained back last eveining. We did barbell rows, which I probably only do a few times per year, and haven't done in a very, very long time. But they felt very effective. We only went up to 225, I got 12 on my last set, I do remember that, then cable rows, stiff arm pull downs, barbell shrugs, kettle bells slow curls, and the Hammer preacher machine...and seated calves. Nothing out of the ordinary, but a good couple of hours of work.
Posted by Kate Baird at 7:29 AM

Oh my goodness, your friend is dieseled!

that is an awesome display of muscle stamina....wow!