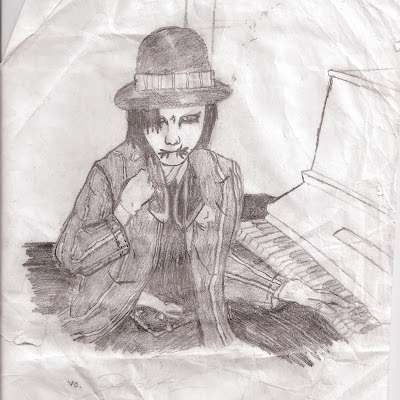 First I must brag on my darling son, Slater. He is 14, in the 8th grade. He won an annual award from his school last night for recognition of his artistic talents. The picture here is one he drew a year or two ago. I like it because it actually kind of looks like Slater. He is also an extremely talented musician. He plays guitar, base, keyboards, and trombone. He even writes his own music and he and his friends in their band play it. I always say I must have done something really right in my previous lifetime to deserve him(couldn't be this one)! A proud mama I am.
GW and I had a kick ass workout today. My bench is still not up to par, but it was much improved over the last couple of weeks. Improvement is always good. I'm being conservative in my expectations, even though it is a false conservatism. It was a good all around work session, both of us tired, both of us stressed, but still putting what we had into what we could, and making it all work out positively.
Dieting is coming along fine, in fact, I probably need to ingest more calories. I'm already eating more than I think I should, and I've already lost 8 pounds in 10 days. I'm going to reiterate a point here that no one believes, but is true. I do NOT, nope never, don't even THINK about doing cardio. I honestly believe that most people overdo it wayyyyy too much, then try to compensate the overtraining and muscle loss by adding in extra pharmaceuticals that they could have foregone in the first place had they skipped the cardio. Most of them aren't doing true "cardio" anyway... you don't want to believe that I don't do any, well, don't, but I'm certainly making out ok not wasting my time bouncing up and down on the friggin' eliptical machine or stationary bike. I have better things to do.
Posted by Kate Baird at 3:40 PM

ANYTHING but cardio. ANYTHING!